The famed “Gonzo Journalist” Hunter S. Thompson first used his famous phrase “Fear and Loathing” in the essay he wrote immediately after he heard of JFK’s assassination.

Among other things, Thompson accurately predicted that:

“My concept of the new novel would have fit this situation, but now I see no hope for getting it done, if indeed, any publishing houses survive the Nazi’s scramble that is sure to come.” (Emphasis added)

Hunter S. Thompson had always struggled with the dichotomy between fiction and non-fiction, so his gonzo style blurred the distinction between those literary genres.  His writing resembled an extemporaneous, trenchant, stream-of-consciousness outpouring, yet it was formed upon a base of verbatim quotations, transcribed notes and excerpted article citations.

His “Gonzo Journalism” (a term derived from a South Boston Irish aphorism describing the last man standing after an all-night drinking marathon) according to his own definition the term, “is a style of reporting based on William Faulkner’s idea that the best fiction is far more true than any kind of journalism.”  That term has even made its way into the Random House dictionary, which uses such words as “bizarre, crazy and eccentric to define it.”  He did not appreciate that description, as he explained in an interview with Matthew Hahn (See “Writing on the Wall — An interview with Hunter S. Thompson”  The Atlantic, August 26, 1997 [https://www.theatlantic.com/past/docs/unbound/graffiti/hunter.htm])

“Gonzo Journalism is a term that I’ve come to dislike because of the way it’s been cast: inaccurate, crazy. And in a way it might sound like, What am I complaining about? But there’s a big difference. What I called Nixon is true — just a little harsh.”

There can be no doubt that he was surely the first to understand the full implications of JFK’s murder, including the dismal future of any hope of publishing real truths of historical facts.   Unlike most of us – too afraid to ponder the unknowns for very long – HST immediately began poking the hornet’s nest.

Three months after the assassination, Thompson wrote to a friend:  “The press can’t sell me Johnson.  He don’t smell right.”

Unfortunately, his 1968 plan to write a book on Johnson’s mendacity was cancelled by the publisher (Ballantine Books) when Johnson abruptly dropped out of the reelection campaign. 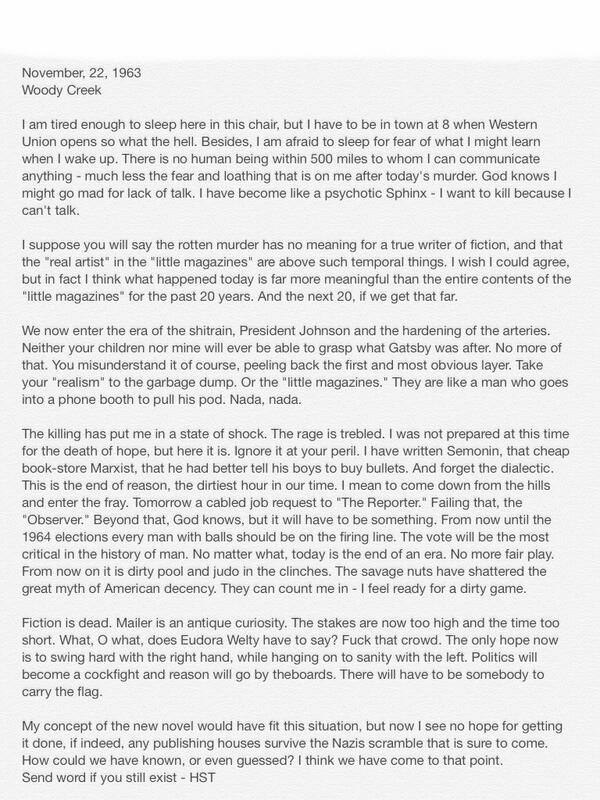